Anna was born in Yerevan, Armenia in 1976. The daughter of two successful engineers.

Always precocious she started painting when she was six years old on their family’s living room wall; the punishment she received held her back until medical school when she took up her brushes again as a hobby in her free time.

She sought out professional artists in the Vernisaches (Markets) in Yerevan as well as friends student artists at the National Art Gallery and museum of Armenia.

Her second exhibition followed two years later; as a result she was invited to exhibit in Armenia’s National Gallery.

Since then people all over the World have purchased Anna’s oil and watercolours.

Anna has participated and established numerous exhibitions, and has had paintings displayed in the Mall Galleries, London.

Also numerous participations and displays at the Scientific and medical Conferences.

Acted as an honoured Judge for the first time the Young Art Exhibition organised by the Cancer Research UK in March 2011, with the second upcoming very competitive event this spring in March - April 2012. News will be posted and updated closer to the date.

IT IS ALL ABOUT ANNA 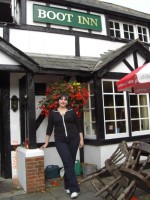 My latest news, events and adventures will be featured here.